or someone like Maria Montessori – who shone the far-sightedness of her gaze, thought on contemporary history, and kept strong ties with her homeland while reaching a major turning point in the notion and upbringing of children all around the world thus giving momentum to a new Humanism – there are just a few places to be born in.

Born in Chiaravalle on August 31, 1870, Maria spent little time in her hometown since she left when she was 3 to follow her father who moved to work in Florence and then again in Rome. In 1896, while living in Rome, she graduated in Medicine – she was one of the very first Italian women to do so – and in 1907, she opened the first Children’s House in the San Lorenzo district, thus ushering an educational blueprint meant to reach out to amazing scientific and philosophical directions worldwide. She never gave up her roots though, nurturing a sort of restrained, cautious but sympathetic nostalgia towards her homeland.

Chiaravalle never forgot about her too and dedicated to Maria Montessori a downtown avenue, a school center and the local hospital. Also, Chiaravalle embraced the Montessori method by applying it to its Municipal Nursery (named after Mario Montesano Montessori, Maria’s son as well as main collaborator and promoter of her educational mission) and to the Istituto Comprensivo Maria Montessori, the sole Italian state school where you can get a Montessori education starting from kindergarten and all through lower secondary school.

The Municipality of Chiaravalle was also committed to promoting thoroughly the figure and thought of Maria Montessori by focusing not only on her revolutionary pedagogical method but first and foremost on the woman as a scientist, philosopher, peace ambassador and pioneer of a game-changing notion of the human being.

The big aim was going back to the overall meaning of her existential and cultural research, which has always been about educating to freedom. 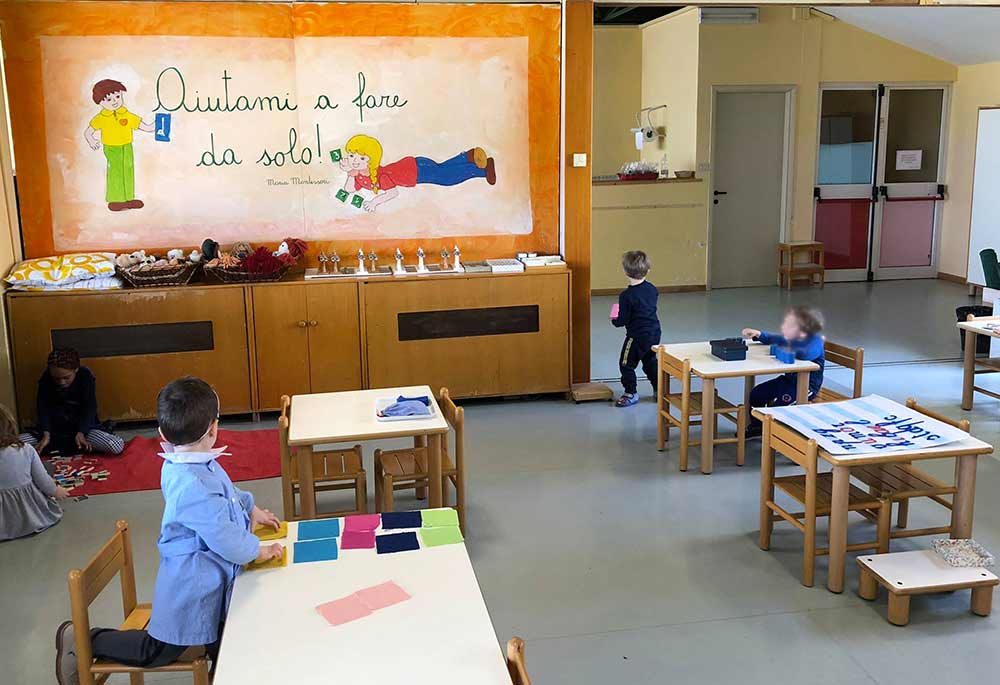 The Fondazione Chiaravalle Montessori has taken on this task since 2006. It currently carries out a significant Montessori-based training for teachers and educators, keeps archives and develops dissemination projects, connects with schools and universities both in Italy and abroad, promotes the knowledge of Maria Montessori’s figure, thought and method and organizes visits to Montessori school facilities as well as to her native house.
hen her house was first opened to the public in 2000, the Municipality of Chiaravalle had a theme composed by maestro Roberto Molinelli on a libretto by Paolo Peretti. It was called Montessoriana and premiered at the Municipal Theater.

In 2016 Maria Montessori’s native house was included in the FAI (the Italian Environmental Fund) Spring Days circuit, attracting a motley crew of thousand visitors in just a couple of days and satisfying their curiosity not only about the scientist’s birthplace but also about her rich bibliographic, photographic and documentary archive and on the wide range of Montessori materials on site. Furthermore, in 2018, Maria Montessori or the Discovery of the Child was staged at the Municipal Theater under the direction of Gianfranco Pedullà: it was produced by the Municipality of Chiaravalle and interpreted by the members of the VisionArea theatre project in collaboration with Teatro Popolare d’Arte and applauded by an audience of hundreds.


For the 150th anniversary of her birth, the Municipality of Chiaravalle upped the ante also in terms of cultural tourism: someone like Maria Montessori could bring an extraordinary added value to Chiaravalle, her native region and Italy as a whole. Thus, in cooperation with Marche Region and other partners, the Municipal Administration has taken action to make the most out of this. The biggest challenge was undoubtedly the revamping and enhancing of Montessori House, which was redesigned as a space spinning around the many faces of the scientist.
On August 31, 2020, the whole world celebrated the 150th anniversary of Maria Montessori’s birth but only Chiaravalle could add the subtitle Maria Montessori: Homecoming to the MM150 array of celebrations held from 30 August to 6 September. With its rich feature network and wide range of initiatives (projections, music, books, shows, games, creations, installations), that week turned Chiaravalle into an outpost of that child-sized world imagined by Maria Montessori as well as the place of her ultimate comeback. It is no coincidence that, when developing the logo, we were almost literally – as well as typographically – inspired by the 1950 manifesto announcing the visit of this citizen of the world to the people of Chiaravalle. A comeback Maria was yearning for and a sort of prelude to her departure from earthly existence, which occurred two years later. 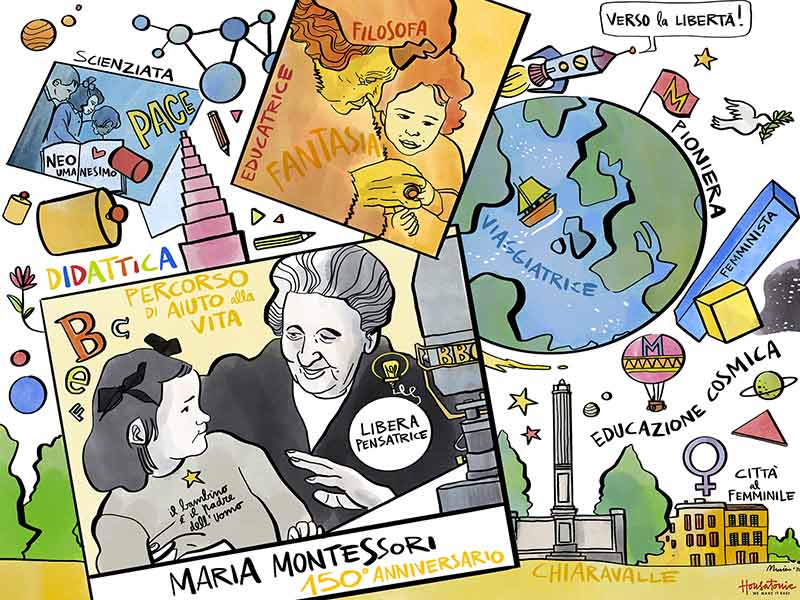 President of the Republic Sergio Mattarella also dedicated a significant statement to the anniversary:

Maria Montessori was born one hundred and fifty years ago in Chiaravalle. Her humanity, her studies and her boldness as an educator left a deep mark in pedagogical sciences and opened new ways to schooling for young people all around the world, who could and actually did enrichen their personality in utter freedom.

In the toughest years of the twentieth century, Maria Montessori managed to break ancient prejudices by exposing the unreasonableness of teaching methods based on authoritarianism and opposing marginalization against those who were suffering or were considered different, thus paving the way for a path of growth based on the full expression of child’s creativity in a sociability-oriented education.

Her “method” crossed borders and, in its name, many educators, boys and girls, have given school a growth in knowledge that – alongside the literary and scientific knowledge – has an eye on the full development of pupils’ personality.

Maria Montessori’s life was a symbol of freedom, intelligence and female creativity. A whole lot of teachers, educators and school workers are still committing themselves today with the same passion.

Schooling community is a major asset for the future of the national community since it is such a unique way to socialization for children and young people. We understand its importance even more after the pandemic-induced closures. Maria Montessori is like a call to boldly face our responsibilities in times of hardship. 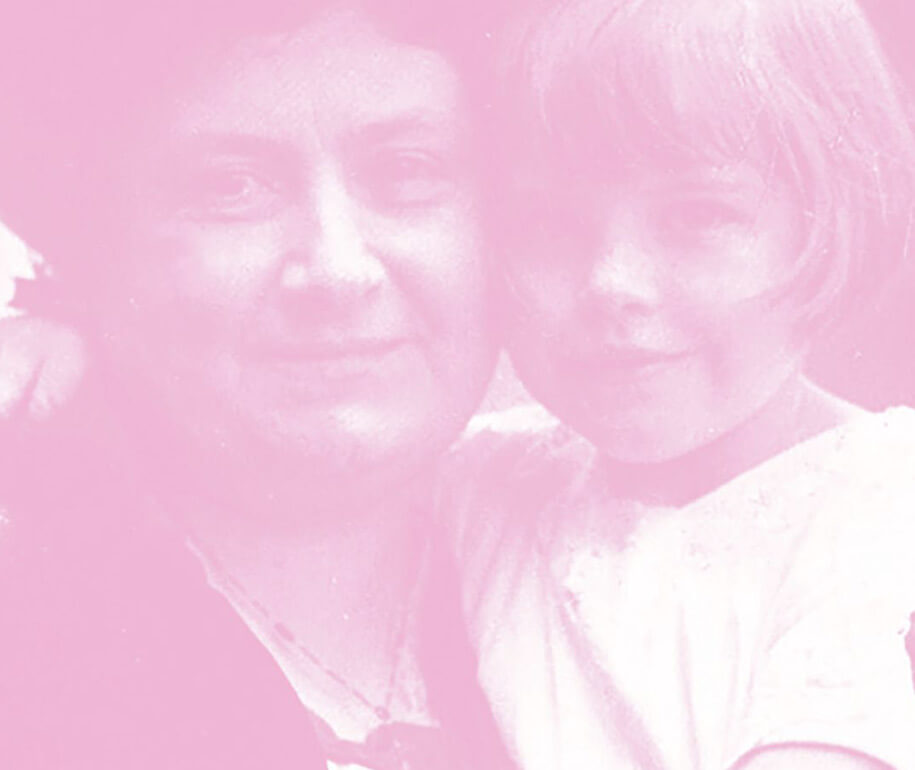